Before going to bed for the night, everyone has their own habits. But is drinking water before bed good? Let’s see what advantages (and disadvantages) this routine can bring.

Hydration is important for the well-being of our bodies. And to hydrate yourself, rule number one is to drink water. Drinking water before bed can, therefore, help you stay hydrated at night. Drinking a glass of water before bed is especially good if the drink is lukewarm: the heat, in fact, helps digestion, fighting cramps and stomach pains. It also allows you to cleanse yourself of toxins accumulated during the day.

Drink before bed to burn calories

Did you know that drinking water before bed can help you lose weight? Drinking water is accompanied by a sense of satiety, thus reducing the desire to eat more food. In addition, a 2014 study showed that drinking cold water increases the consumption of calories: in fact, our body spends energy (in the form of calories, in fact) to heat the water and bring it to the correct temperature.

Furthermore, without the right amount of water, the body cannot metabolize carbohydrates in the correct way. The fat metabolism, called lipolysis, in fact, follows several steps. The first is called hydrolysis, which occurs when water molecules interact with triglycerides (fat molecules). Drinking water before bed is therefore also useful for metabolizing fatty substances and, consequently, can help you lose weight.

A glass of water to purify yourself 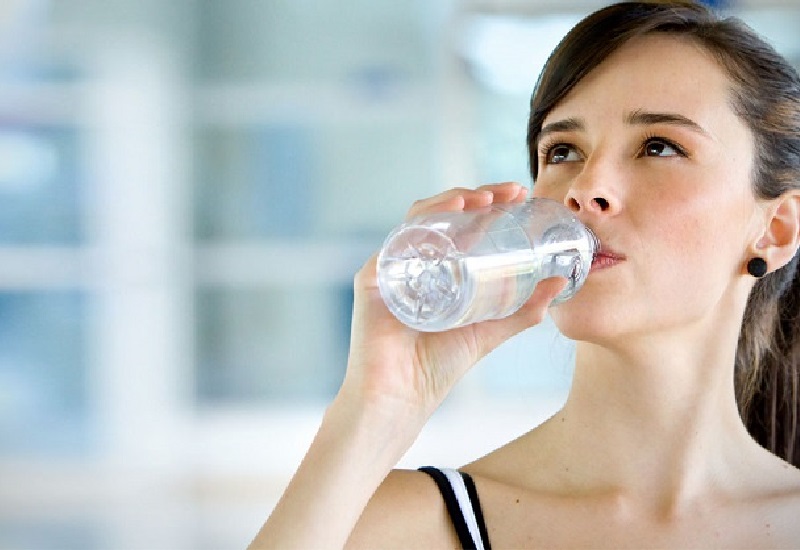 When the body is not sufficiently hydrated, it cannot effectively remove waste through urine or feces. Drinking water before bed, and generally during the day, helps the kidneys to filter out toxins and remove them from the body. When the body is dehydrated, in fact, the kidneys are forced to retain fluids and, consequently, toxins are not eliminated.

A glass a day takes the mood out of the way

According to a recent study (COMSTAR project), water deprivation has a negative impact on mood, which in turn could have negative consequences on the sleep-wake cycle. Increasing water consumption improves positive emotions, the sense of satisfaction and calm in people who drank little. On the contrary, in this study, it was observed that subjects accustomed to drinking a lot of water during the day had a worsening of mood when this amount was reduced. It is still unclear what the mechanisms in which drinking water before sleep can affect mood, and other studies are needed to shed some light on this point.

The cons of drinking before bed

Drinking immediately before bed, however, could have negative sides. In particular, drinking before bed can increase the number of times you need to pee overnight. The production of urine naturally decreases during the night’s rest, to allow you to sleep for six to eight hours without interruption. Drinking a glass of water before bed can alter this cycle. This is especially true when it comes to older people: the older the age, the more likely you are to develop an overactive bladder. This can also be associated with several diseases that are more common among the elderly, including, for example, diabetes.

How much water every day?

Drinking about a liter and a half of water (eight glasses) a day is a good goal. Of course, the amount of water you need varies depending on the age, sex and lifestyle you follow, and of course, it also depends on the atmospheric temperatures.

Some tips for being hydrated in the right place? Here they are.

Increase the amount of fruit and vegetables consumed with meals, because they are foods that contain high quantities of water

-Drink a glass of water with meals

-Before and after exercise drink a glass of water.

-Drink when you feel hungry because sometimes the urge to thirst is mistakenly confused for appetite.

HOW TO HAVE A HEALTHY LIFE

Tue Mar 24 , 2020
Spread the loveLeading a healthy life is closely related to a way of life that includes the habitual practice of physical activity accompanied by a healthy diet. Sport and health are closely linked. A balanced diet and sports are effective in slowing down health problems when both are a regular […]

Types of roller blinds-The touch of difference in your home

How to choose boxing gloves

Care should be the diabetic patient

11 reasons to exercise at night